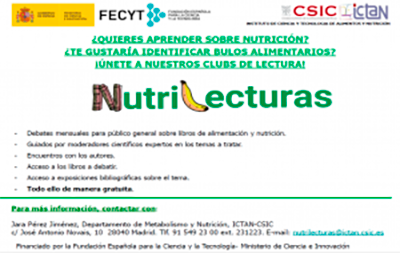 The Spanish Foundation for Science and Technology (FECYT) has included, among the funded scientific dissemination projects in its last call, “NutriLecturas: promoting open reading clubs on scientific books in research centres”, coordinated by Dr. Jara Pérez, from ICTAN. This project, included in the topic on promotion of critical thinking, will develop reading clubs for general public based on scientific books on food and nutrition, written by recognized researchers. NutriLecturas has the participation of seven ICTAN researchers as moderators in the discussion sessions on the books, the writers of the four selected books (who will participate in meetings with readers), and three public libraries from the city or the region of Madrid. Registration in the clubs is made by sending a message to nutrilecturas