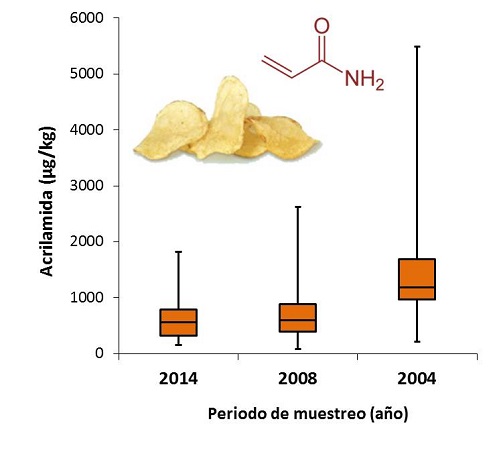 Researchers from the Chemical Modifications in Processed Food –CHEMPROFOOD group at the Institute of Food Science, Technology and Nutrition (ICTAN-CSIC) have confirmed that acrylamide levels in potato chips from Spanish market have progressively decreased during the last decade. The reduction takes place not only on the average, which have decreased from 1484 µg/kg in 2004 to 740 µg/kg in 2009 and 630 µg/kg in 2014, but also on the maximum values. The trend is satisfactory for the snack foods industry since the implementation of mitigation strategies is being effective. However there are still unjustifiably high levels that can be combated with proper selection of raw materials and settings frying operations.
Acrylamide is a chemical contaminant naturally formed during thermal processing and cooking food. The consumption of potato chips has been identified as one of the main contributors to the daily exposure of this contaminant, so that any progress in reducing its content will have a significant impact on the overall exposure by the population. Acrylamide has been classified as a potential carcinogen in humans and recently the European Food Safety Agency has confirmed that the presence of acrylamide in food is a public health concern, requiring continued efforts to reduce its exposure .