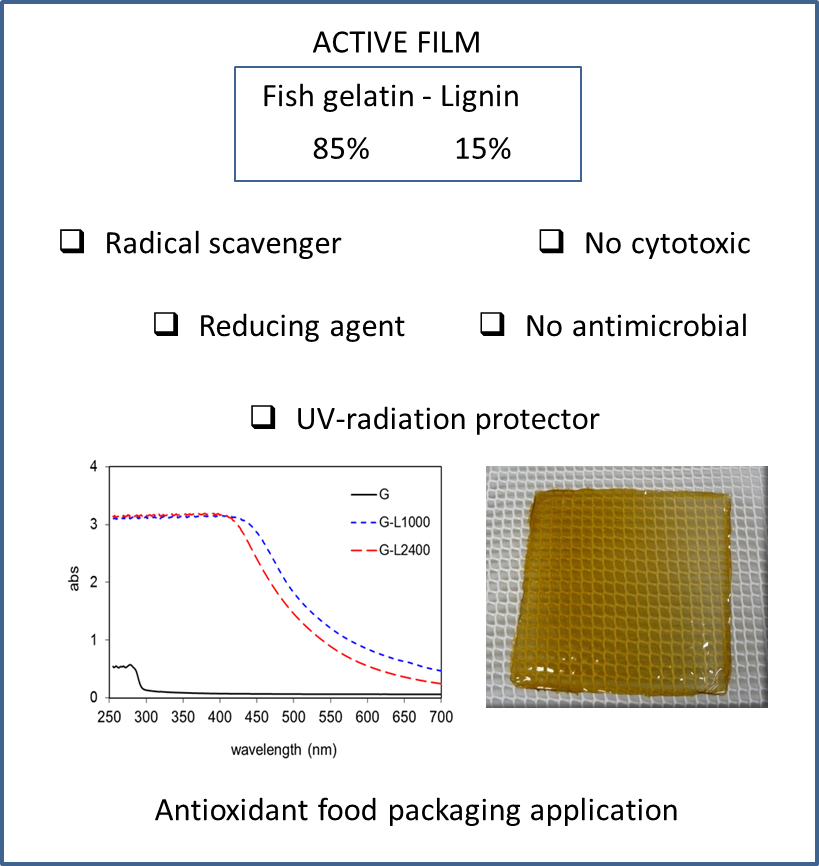 There is an important trend in favor of the use of biodegradable films made from edible biopolymers from renewable sources to combat the environmental impact of plastic waste. In this sense, gelatin has been extensively studied on account of its film-forming ability and its usefulness as an outer film to protect food from drying and exposure to light and oxygen. The highly hygroscopic nature of gelatin is its main drawback when considering the use of gelatin films as protective barriers, because they tend to swell or dissolve when in contact with the surface of foodstuffs with high moisture content. Consequently, the current trend in designing gelatin-based biodegradable materials for food packaging or biomedical applications is focused on developing films with improved mechanical and water resistance properties, by combining gelatin with other biopolymers. Furthermore, enriching gelatin films with antioxidants and/or antimicrobial substances will extend the functional properties of these biodegradable films and provide an active packaging biomaterial. Because of “clean labelling” concerns, there is growing interest in using plant extracts as natural sources of polyphenolic compounds in the formulation of gelatin films. Lignin derivatives, which are complex polydisperse natural polymers made up of phenyl-propane (C6−C3) units, represent an important waste material which could be successfully employed as a filler agent for improving the water resistance of biopolymer films with extremely high water solubility, as is the case of cold-water fish skin gelatin films. Moreover, they could be successfully employed as active agents for providing gelatin films with antioxidant capacity at non-cytotoxic concentrations. The improved light barrier properties as well as suitable mechanical and structural properties of gelatin-lignin composite films make them interesting candidates to be used for potential food packaging applications.